Systemic change has been a frequent topic on this blog – as it is in my work. After running after the perfect conceptualisation of systemic change for many years, this post is inspired by my realisation that there may be different ways to look at systemic change – all correct in their own right. I have discussed systemic change with many colleagues and friends and I have always tried to reconcile different views on the concept, only now realising that they might not be reconcilable. So here an attempt of a typology of systemic change (initially differentiating two types) – nothing final, just trying to put my thinking down in writing.

A warning in advance. This article is rather conceptual and I’m introducing some models that might be new to my readers (but then again, I have done that before). I’m trying to sort through recent reading in my mind to better understand the types of systemic change. This should not stop you from reading it of course! I would be happy to discuss this with anybody! 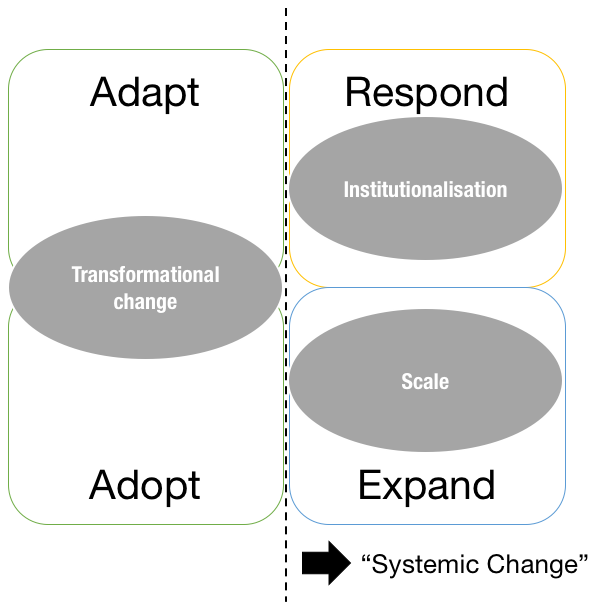 Recently, I listened to a presentation in which a project using a market systems approach presented its strategy to assess systemic change initiated by the project. The project uses the Adapt-Adopt-Exapnd-Respond (AAER) framework (which I have blogged about before). At the same time, they superposition the framework with language of the systemic change framework that I developed for Katalyst in Bangladesh [1], using the terms ‘transformational change’, ‘scale’ and ‘institutionalisation’ (the framework is described here and I have further developed it subsequently, described here). While I agreed that what the project has achieved can indeed be seen as systemic, I also realised that there are different types of systemic change. At the same time, I also felt that the way they superpositioned the frameworks was not coherent with my thinking. So I did some more thinking …

Systemic change as a scaled innovation

As I have explained in my earlier blog post, the logic behind the AAER framework is that the project introduces an innovation into a system together with one or a few local partners, usually businesses. The idea is that the innovation makes some products or services more accessible to the poor in the market – for example the introduction of a smaller, more affordable packet size of quality seeds to the market which was more appropriate to poor consumers as in the case of Katalyst. The project’s partner adopts this innovation and integrates it into its business strategy and operations, potentially adapting it along the way, for example to fit better into its operational or marketing strategy. In the expansion stage of AAER, either the partner businesses scale the innovation into new geographical areas and markets on their own and/or other competing companies copy the model. So this is reaching ‘scale’ of the type of copying and pasting something that works to reach larger numbers (this way of interpreting scale has been criticised and other ways to interpret scale have been suggested here). Finally, when the system around the innovation responds to the new way of doing things by either offering complementary services from non-competing companies or by adjusting regulations, we reach ‘institutionalisation’. In the logic of the AAER framework, if an intervention reaches the Expand and Response stages, it is seen as being systemic change.

I have always been sceptical about the logic behind the AAER framework, as some of my readers know. Yet I also felt during this presentation (as I did when I read these Katalyst case studies), that interventions that follow the AAER framework’s logic can still achieve some type of systemic change. So how to reconcile this confusion?

Now we get to the conceptional part, bear with me. A model that I discovered recently and found quite useful to understand transformations in systems is the concept of sociotechnical transition pathways, described by Frank Geels and Johan Schot [2] (the terms ‘transformation’ and ‘transition’ are used synonymously here). In the cited article, Geels and Shot describe a multi-level perspective (MLP) on sociotechnical systems [3]:

The sociotechnical regime is an extended version of Nelson and Winter’s (1982) technological regime, which referred to shared cognitive routines in an engineering community and explained patterned development along ‘technological trajectories’. Sociologists of technology broadened this explanation, arguing that scientists, policy makers, users and special-interest groups also contribute to patterning of technological development (Bijker, 1995). The sociotechnical regime concept accommodates this broader community of social groups and their alignment of activities. …
Technological niches form the micro-level where radical novelties emerge. These novelties are initially unstable sociotechnical configurations with low performance. Hence, niches act as ‘incubation rooms’ protecting novelties against mainstream market selection (Schot, 1998; Kemp et al., 1998). Niche-innovations are carried and developed by small networks of dedicated actors, often outsiders or fringe actors.
The sociotechnical landscape forms an exogenous environment beyond the direct influence of niche and regime actors (macro-economics, deep cultural patterns, macro-political developments). Changes at the landscape level usually take place slowly (decades).
The multi-level perspective argues that transitions come about through interactions between processes at these three levels: (a) niche-innovations build up internal momentum, through learning processes, price/performance improvements, and support from powerful groups, (b) changes at the landscape level create pressure on the regime and (c) destabilisation of the regime creates windows of opportunity for niche-innovations. The alignment of these processes enables the breakthrough of novelties in mainstream markets where they compete with the existing regime. [2:399-400] 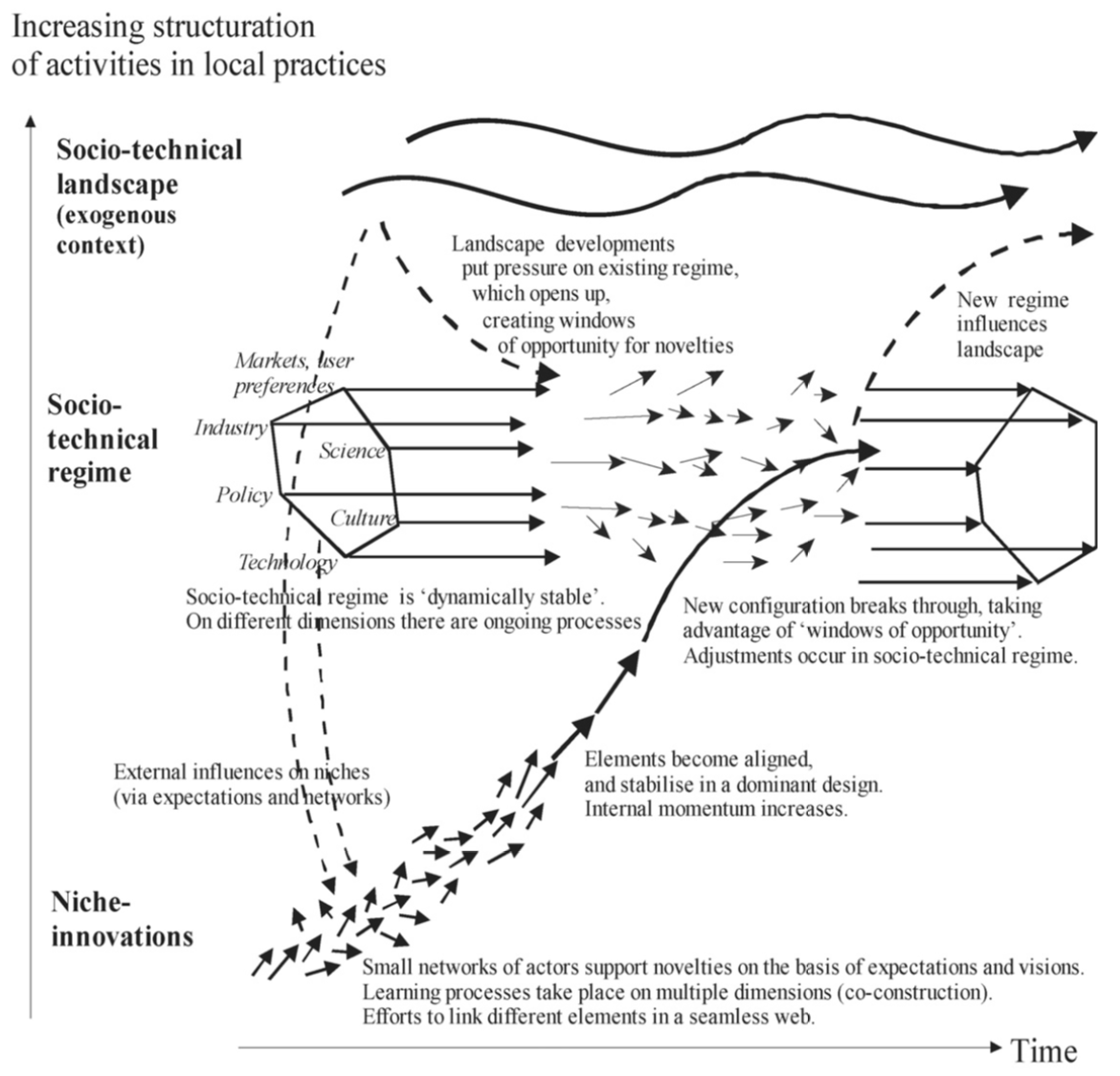 An illustration of the multi-level perspective described by Geels and Schot. Source: [2]

AAER starts with a niche-level innovation

Let’s think back to the process behind AAER. A project develops together with one or a few organisations a new, innovative product or business model to address some or other underperformance of the market in the way it serves the poor. Understanding the theory behind the sociotechnical transitions, such an innovation would be located on the niche level. Furthermore, it would only be able to reach scale, i.e. enter the mainstream defined by the current sociotechnical regime, if it is in line with this regime – or in other words, if it does not question the current regime.

Why is that? Following Geels and Schoot, there are two types of niche-innovations:

In the case of niche-innovations with a symbiotic relationship with the existing regime, such innovations would easily scale but at the same time they would (through problem solutions and performance improvement) potentially stabilise and strengthen the current regime.

However, Geels and Schot make it clear that even if niche-innovations have a competitive relationship with the existing regime and a window of opportunity opens, the niche level will not always be able to use opportunities created by weaknesses in the regime to introduce a new sociotechnical paradigm. The elements of the niche level need to be mature enough, become aligned and stabilise in a dominant design. Even if there is pressure on the regime to change coming from the sociotechnical landscape, if niche-innovations are not mature and organised enough, regime actors will respond by modifying the direction of development paths and of their innovation activities without putting the dominance of the regime in danger.

Two types of systemic change – the beginning of a typology?

The typical pathway described by the AAER framework builds one part of a typology on systemic change. An innovation is introduced to rectify a problem in the current regime and, as it is in a symbiotic relationship with this regime, it is quickly scaled and integrated in the regime. This type of innovations generally stabilise the regime – which is ok if one is in favour of this current regime. In this case, one would not talk about a system transition, but still about systemic change – as the innovation has reached scale and benefits many people.

Following the logic of the AAER, a change is systemic if it is scaled and institutionalised within the current sociotechnical regime. In other words, a change can be systemic without being transformational (there might be a certain adjustment in the ‘respond’ phase but this does not change the underlying paradigm of the current regime).

On the other hand, there is systemic change that is also transformational. This happens if the innovations on the nice-level are competing with the current regime and they are mature and aligned/organised enough to take advantage of a disturbance of the regime coming from the landscape level. In this case, the regime would be replaced by a new one.

Now what should we aim for, systemic change without transformation or transformation? One could argue that when looking at poverty reduction efforts, we should aim at the latter. If we only focus on introducing innovations that are symbiotic with the current regime, we might be able to scale an innovation that helps the poor in a certain way. Yet, the overarching regime that creates the situation in the first place has not changed. At the same time, one could argue that system transitions are extremely risky because one can never be sure what a system transitions into – which would be the antithesis of a ‘do-no-harm’ approach. So one could argue that development actors should aim for systemic change without transition – which again could lead to the argument that this might stabilise a regime that we don’t really support. So there is a lot to discuss here and I certainly don’t have the right answer.

We also would need to discuss how interventions would differ if they were aiming for either of the two types of systemic change. But that is material for a next blog post.

PS: I still think, thought, that ‘transformational change’ cannot be on the left side of the AAER framework …

[1] I of course can only assume that this is where they have taken the terms from, otherwise its a big coincidence that they have come up with exactly the same terms … just thinking about how long it took me to decide on them.
[2] GEELS, F.W. & SCHOT, J. 2007. Typology of sociotechnical transition pathways. Research Policy, Vol. 36(3):399-417.
[3] The term ‘sociotechnical system’ might confuse some of the readers here, as the ’technical’ could be interpreted as depending on specific physical technologies. But the application of the concept of technology here is much broader. In the way the concept is applied in this knowledge domain, society itself, and most of its substructures, can be seen as complex sociotechnical systems. Indeed, the means for society to self-organises itself are often called ‘social technologies’. See for example CUNNINGHAM, S. & JENAL, M. 2016. Rethinking systemic change: economic evolution and institution. Technical paper. The BEAM Exchange.

6 thoughts on “Attempt at a typology of systemic change”