When I wrote my last post about experimenting with new structures for a complexity aware Theory of Change (ToC) in Myanmar, I had a few elements in place, but still some questions. Going further back to an earlier post, I was clear that differentiating between clear causal links for complicated issues and unpredictable causalities for complex ones is critical. I have been thinking about that a lot and last week I have taught a session on monitoring in complex contexts and I think I have found the final piece of the puzzle.

Going back to my last post, here is the structure I proposed:

What I think makes sense are the first and second points. We develop a portfolio of interventions and for each intervention we define what reaction we expect, i.e. we define an uptake. This can and should actually contain both signs for success and signs for failure as well as strategies to amplify positive patterns that emerge and dampen negative ones. What I changed now are the layers 3 and 4 in the list above. Let me start ‘on top’. Layer 4 should give us the direction of travel – where we want to go with our project or programme. If we are locked into a logframe environment, this is often reflected in outcome and impact objectives. Of course this is not ideal in a complex environment as we cannot predict what success looks like. Therefore, this ‘top layer’ should be our strategic intent as defined in Systemic Insight. The strategic intent is not a fixed objective but gives us a sense of direction and allows us to decide whether a new emergent pattern is ‘better’ than what was there before.

Between the uptake layer and the strategic intent layer, there was still a void. Back in Myanmar, it became clear to me that although I knew that this is about interactions among the intervention and with the context to achieve the emergent improvement we want to see, I was not clear exactly how to capture this. Over the last weeks, this has become clearer and I could include my new idea in the session on M&E I did in last week’s Mesopartner Summer Academy. The reaction of the participants has been very positive.

Ok, so let me bring these thoughts together before giving two examples.

Here the layers of the ToC that I suggest, from the bottom up (although direction does not really play a role, so if you prefer left to right, right to left or top down, I don’t mind): 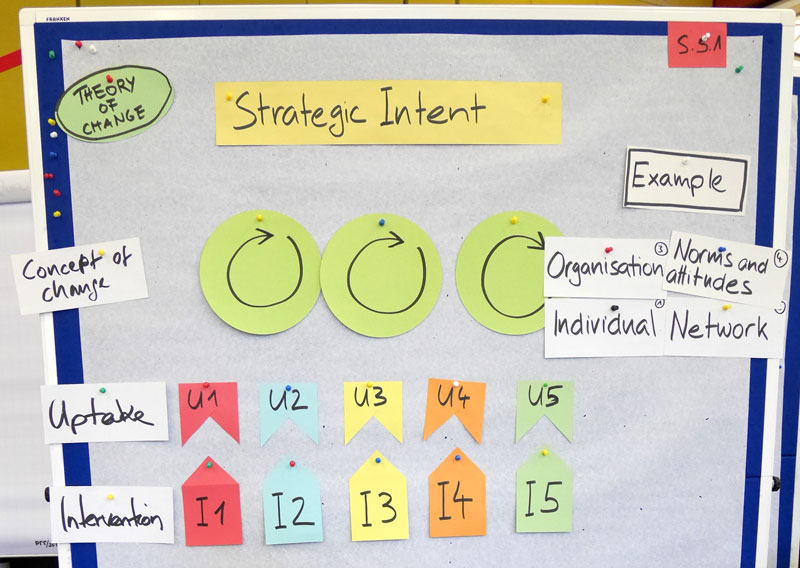 The elements of the Complexity Aware Theory of Change as I used them for the session at the Mesopartner Summer Academy 2016 in Berlin.

Two example on how we can use this.

First example: For the project in Myanmar, I suggest that as a conceptual understanding of change in the rubber market we take the heuristic framework of the ‘five functions a market needs to work’ that we use a lot in our teaching on markets and market failures in Mesopartner. It draws from an influential book by John McMillan (McMillan 2002) and other scholars. Here are the five functions:

These five points would then be further described specifically for the project in order to make them relevant. In the beginning, this could be done in a rather generic way (e.g. information on market prices and knowledge on improved production techniques flows more smoothly through the sector and particularly to the smallholders). In a later stage, theses five functions could then be define more specifically once more is understood about the potential influence the project can have and the interconnections and dynamics in the sector. 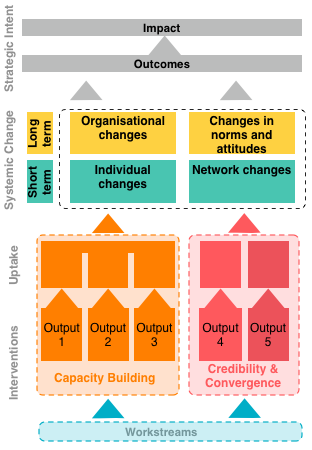 The BEAM Exchange Theory of Change without detailed content. It shows the levels of interventions, uptake, systemic change (using the CB2 dimensions) and strategic intent.

The BEAM ToC is based on a Logframe that was agreed on with DFID. Hence, the ToC includes the defined Outputs. The portfolio of intervention is defined through a number of work streams. The Outcome and Impact objectives are used instead of a strategic intent. The four boxes on the systemic change level are further refined by a number of bullet points with changes that are seen as required in each dimension in order to achieve the outcome and impact objectives. While the bullet points were very generic in the beginning, we are currently working on refining them based on a better understanding of the dynamics in the sector.

It would be great to get some comments and thoughts on this suggested approach to a more complexity aware Theory of Change.

8 thoughts on “Refining the Complexity aware Theory of Change”